Tik Tok: Attention To Detail In Ads? (or… How To Spot Ad Fraud)

Tik Tok: Attention To Detail In Ads? (or… How To Spot Ad Fraud)

So Eve, who is always Googling online advertising issues, is now being targeted as an ad buyer by Facebook and thus seeing the expected ads. And this ad from Tik Tok recently appeared on her Facebook feed: 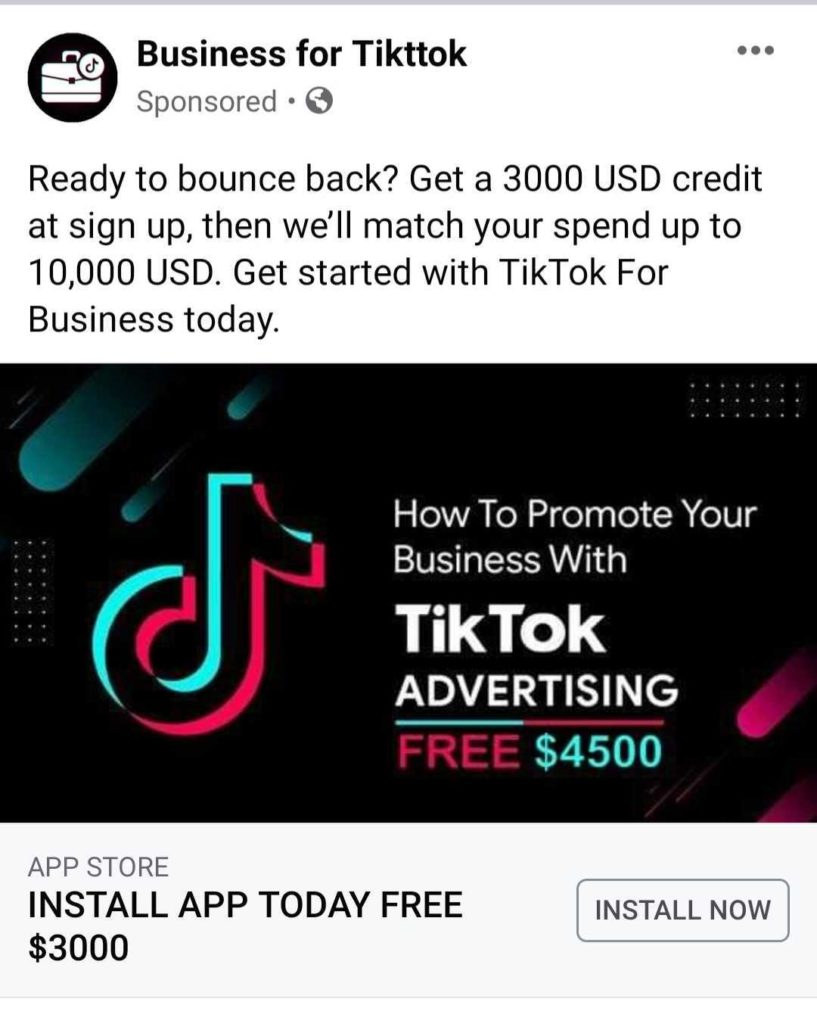 This ad stands out for a few reasons.

Second. So, Tik Tok is giving away $3k in ad spend, and the primary headline at the bottom and smaller text at the top says that. But the image itself says that they are giving away $4,500, not $3,000! Which is it, Tik Tok?

This is most likely a mistake given away from their A/B testing. They probably wanted to test different amounts to see which resulted in the newest advertisers (or maybe the highest lifetime spend per advertiser but that’s probably still too early for that). And most likely, the person running the ad campaign is just some guy, who just copied the Adset and forgot to update the copy.

One lesson from here is: through mistakes and minor slip-ups, even the most minor and trivial ones, we can get glimpses of someone’s strategies and their budgets.  Now we know they’re willing to give away 50% more (from $3k to $4.5k) just to see what is the most effective.

Now that is a mistake that is likely far–far–past the competence level of even the most incompetent person who set up the account. Not getting the company name spelling right there?

This mistake is so far gone, it sets off the fraud alarm bells! Run, run, run far away!

While this little typo is enough to raise red flags, when taken into account with the other two issues–an offer that is far too good to be true; and a massive difference in the offer between the text of the ad and the image of the ad–this leaves little doubt that this is a fraudulent ad.

So, this leaves us with two more interesting conclusions.

The first is that ad fraud goes deep and it has big bucks behind it, and Facebook (much like Google) turns a blind eye to it.

But the second is that it is through paying attention to minor details, like typos, that we can divide the real from the fake. The truth is often right in front of our nose, as Orwell teaches us. But Orwell doesn’t tell us that it’s only the microscopic atoms of subtle details that give away the game.