Home›Display Ad Reviews›The Ad version of “do as I say, not as I do”

If I asked 100 people to describe the last year and a half with three words then probably the most popular ones would be “pandemic, covid, and MASKS”, wouldn’t they? Because pretty much everyone now has this pandemic mindset that definitely involves many things that our previous lives did not, and one of them definitely involves having a cloth over your mouth and nose every time you leave your place. And to get us all on the same page about it there were a couple of things that matter the most: spreading information about it and having medical professionals warn us that masks were the main protection barrier against viruses. So what happens when we are going through a website and bump into this sort of Ads: 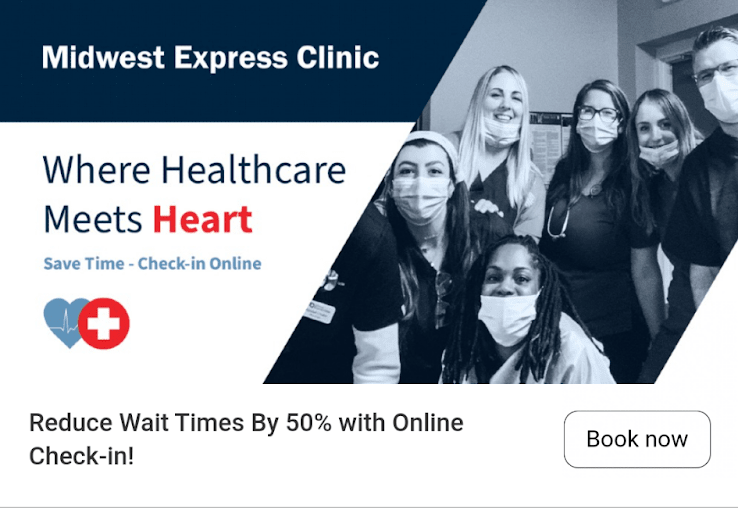 Don’t get me wrong, I love Midwest Express Clinic’s initiative to reduce my wait time, but you may notice something other than that in this Ad: 3 out of 6 people featuring in it have their masks underneath their noses or even not covering any part of their faces at all. That’s literally 50% of the Ad’s protagonists wearing their masks wrongly, spreading a terrible message where health professionals aren’t capable of wearing their masks correctly, not even for a picture that will be purposely published all over the internet.

So lately we’ve been discussing how Display Ads have become less effective, and this seems like a perfect example of why people have been caring less and less about the Display Ads they are exposed to. No matter how much I hate waiting rooms, I would never trust a clinic whose doctors just take out their masks in order to smile for a picture. Come on, we are more than a year into the pandemic, it is no longer allowed for mistakes like this to just slip. As we were saying before, health professionals should be (and usually are) the ones setting the example on the correct way to protect ourselves and the people around us.

So to start reviewing this Display Ad, what first comes to my mind is the person who owns this clinic’s reaction to seeing it. I mean, we know that creating and launching an Ad Campaign it’s not an easy process, so in the many steps that this Ad went through, ever since they came up with the wording, design, target strategy, final reviews, didn’t anyone realize this? It occurred to one the idea that a Display Ad with literal doctors not wearing their masks could not be the best move? Guess not.

Another aspect worth being analyzed is the impact that Ads like this can have. It’s already a big issue that many people have a hard time taking the pandemic as a serious issue, so what do you think they’ll assume as soon as they see that not even doctors take wearing masks seriously? Well, it shouldn’t be too surprising if they say “okay, doctors don’t, so neither do we.” Misleading Ads have already been proven to not be the best strategy, but this is way beyond misleading, and I’d dare say that it’s a really dangerous move to make.

And all of this leaving aside the fact that the picture and the Ad have absolutely nothing to do. Some Ads that are maybe very general, or that are just about promoting the clinic may be relatable to a group of cool welcoming doctors because it’s all about the positive image the clinic wants to create about themselves. However, being the case that what they want to promote is the online check-in to save waiting time, they could have been way more creative and strategic. For example, they could have included a picture or illustration of someone in a terrible situation (like with a bone showing) sitting in a waiting room full of people with minor inconveniences, expressing how that could be avoided by booking your check-in. And this is just a one-minute brainstorm.

So basically my point here is a very simple one: This Ad, at least to my eyes, gives the clinic a terrible image that includes everything from lack of attention (not even to details, but to very noticeable matters) to literally medical negligence. And all of that for a picture that could have easily been replaced for a better more related one! I just believe this Ad Campaign is really lacking someone who monitors it and takes a minute to think about the actual effects that it could have.

And don’t get me wrong, I’m the kind of person who always keeps in mind that humans are humans and can mess up, and even should mess up. I just think that it was a mistake that could have so easily been avoided and that it was so obvious! Just by glaring at the picture you can realize there’s a problem. It’s not like one person has their mask a little under their nose, it’s half of them, literally in their upper lips or even in their chins. And it’s not like these people are random employers from some random place, it’s health professionals that should be the top example of how to wear a mask.

So, to conclude, I think my opinion here is pretty clear: These kinds of mistakes aren’t just harmful to the clinic itself but also are potentially dangerous for the audience that sees it and takes the example. Not to sound all Google’s ethics norms, but when launching an Ad Campaign, it’s so important to consider not just the profits it could have, but also how it could affect the society itself. That’s why I consider there has never been a better Ad example of the famous refrain “do as I say, not as I do.”