Why would we use such a clickbait headline if it wasn’t, right? So it all started when, in 2017, people started seeing these Ads and buying crazy specific shirts. So, all of a sudden, people were wearing shirts that said things like “Never underestimate a Mother who listens to Iron Maiden and was born in August”, as if you could just buy shirts like that in your local shirt-store.

So it all started when, in 2011, Michael Fowler, who had been in the t‑shirt business for a really long time, figured out it was time to leave the human factor aside, and create a computer code meant to automatically generate thousands of shirts using starting phrases and scanning digital dictionaries. So what he did was use Facebook Ads to target his ads to very specific people according to the information that he got from Facebook’s database. So basically, this guy used Facebook’s data to create crazy specific shirts and literally targeted them by individuals (a.k.a. Target this Ad to Moms who listen to Iron Maiden and were born in August), getting people to feel super identified with their shirts (maybe even suspiciously identified?) and buying them. So leaving aside the genius level of his strategy, doesn’t this sound a little publicised?

Anyway, his hyper-targeted strategy didn’t take long to become very popular and make his business grow insanely in a very short time, because who wouldn’t want a really specific shirt saying people like you are the best? And imagine having an algorithm that counts on a digital inventory of infinite words and data, there’s really no ceiling to it. Until leaving the human factor aside, and completely automating the shirt-creation process brings out a new problem: No matter how effective your algorithm is, it will never be able to replace the common sense a human being can have when deciding if a phrase for a t‑shirt will or won’t be a good idea.

Do you remember 2012? When awkward bangs, mustaches, and “Keep Calm and Carry On” were the main trends? Well, yes, very embarrassing, but also very true. So Michael came up with another brilliant idea: Compile a huge list of verbs to follow up the starting phrase “Keep Calm and…” and have his algorithm create very original catchy t‑shirts. However, again, the human factor was not taken into consideration and so the internet (and specifically Amazon) ended up filled up with these sorts of things: 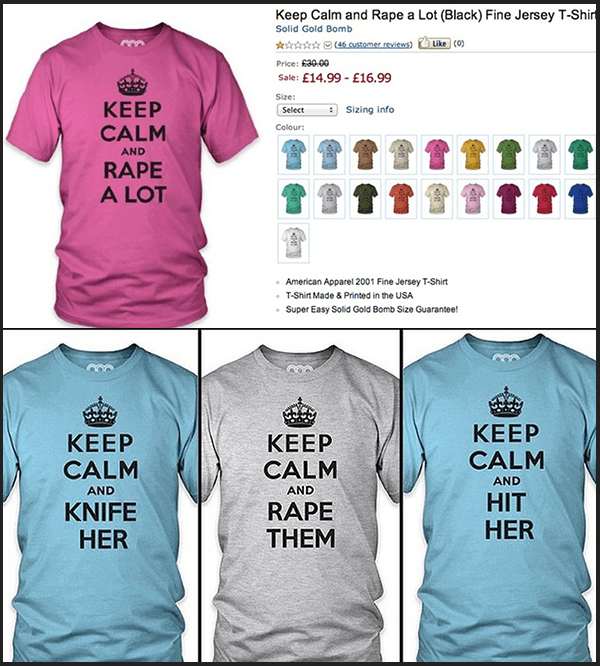 And just like that, with a valid point, the Internet disclosed a fury ranged against himself and his business. His first shot at fixing his mistake was to write an apology letter intending to explain that he wasn’t the one that actually created the shirts, but a computer. And so he tried to blame it on the algorithm, but the Internet was very quick to conclude that, no matter how much you like to automate processes and take advantage of technology, you need to be smart enough to check (or have someone check) what should and shouldn’t be launched.

So this poses the question of how innocent Amazon really is in this whole process. Because, yes, they did take out the product, but they only did it once the entire internet was threatening to set something (like them for example) on fire. It is well known that Amazon has a very detailed Code of Conduct for their sellers, but can we actually trust that they care about it when they let products like these be automatically posted?

Just as Mr. Fowler didn’t care to check what products his computer was automatically generating and posting, nor did Amazon for the general supervision of what was being sold on their platform. Even if there obviously can be grey areas, a shirt that says “Keep Calm and Rape a Lot” is definitely not a grey area, and it should be removed as soon as it is seen. So is there anyone in Amazon actually seeing what people (or computers) post? I don’t think so, and that for me is just as important as Michael’s algorithm.

It also seems very weird to me that the reason for not checking is just an honest mistake because Amazon doesn’t seem like the kind of business that could let an honest mistake happen. In my opinion, Amazon is very aware that people are selling products that don’t fulfill their policy requirements, but, as long as there are no Internet fury rages, they won’t care to remove them. Why? Very simple, because they make more profit out of it. So apparently for some companies profit matters much more than ethics, integrity, and even the law. This shouldn’t come as a surprise, since we’ve already been through the whole Facebook’s inflated metrics scandal.

So, to conclude, I believe it’s really important that we are aware of the challenges that today’s Internet scenario has for us. Companies, now more than ever, care just about their profits and how they can make more of it, so it should never surprise us that their “honest mistakes” usually revolve around areas that happen to be more harmful to their users than to themselves. However, just as it happened in this case, we also should never forget the power that Internet users (and their fury rages) hold and how much they can accomplish when gathering together for a novel cause.

And with that, my final comment about this whole controversy is one: More often than not, we choose to direct all our eyes to just one person, in this case, Michael Fowler and blame it all on them. But it’s important to raise awareness that in every situation there are always a lot of edges and things to analyze, just like we did with Amazon’s partial fault and general responsibility today. So my advice is to always dig deeper, and hopefully, that’s what we accomplished today.