Is the wording for the headlines the best choice for Ads?

Home›Display Campaigns (General)›Is the wording for the headlines the best choice for Ads?

Is the wording for the headlines the best choice for Ads?

In the world of article writing and Ad creating, we always tend to face the same problem: How to get people to be interested in the first thing they see? Meaning, how to get a headline or the wording of an Ad to be attractive for those who see it. Every now and then, we let ourselves get a little clickbaity in the name of getting people to actually click in our Ads and read our articles, obviously always intending to not spread false information.

And since it’s been an issue that we’ve been facing for a while now, you know, ever since Display Ads started to become less effective, we’ve been trying to get more creative and figure out the best strategy for our wording (both in headlines as in Display Ads) really is. Facing that situation, our friends in BuzzSumo created this report on which have been the most effective headlines in these past years. And since headlines and Display Ads face the same challenges, we believe that the same rules apply to both, and today we’ll review some of them, shall we?

So basically what good wording and a headline require is a mix between two things: Actually representing what comes ahead (either the article or the product we are advertising) and also getting people to be interested in it. As simple as it may sound, there’s actually a whole science built around it that tries to figure out which length is the best, which words, which numbers, and even how formal or informal it should sound. All of these in order to come up with the most appealing and close to the truth headline or wording.

According to BuzzSumo’s report, the most popular phrases in Facebook’s world were the ones composed of three words, either as a starter, at the end, and even in the middle. Apparently, this technique happens to be appealing for users and they tend to engage more with posts that include headlines with this characteristic. They also include in this triatic format the use of three adjectives to describe something, and how catchy that sounds. So, in their headline research, they prioritized the ones that filled up this requirement. And this is what they came up with: 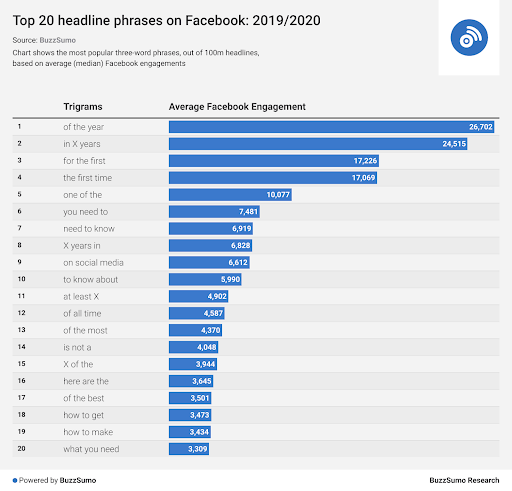 I kind of see a pattern here, don’t you? Apparently in 2020 and 2019 people were very interested in extremes, just like “of the year”, “of all time” and “for the first”. So if that’s the case for Facebook’s post, then we might as well give it a try, right? Even when these phrases may come on a little too clickbaity (would you have entered this article if it was called “the best headlines and Ad wordings of all time”?) it’s always worth giving it a try and finding our way to make them work, right?

Their rapport also included a list of the most popular themes that these headlines revolved around, and obviously, many of them won’t apply to today’s debate, but some of them definitely will. For example, it appears that some of the themes that engaged most users were the ones revolving around surprising facts (which we can always highlight about our projects, “There are at least 10 effective headlines that you are not using”), instructional posts (“What you need to know about Ad Wording”), curiosity-appealing (“The results on which headlines are the most effective report”), guidance (“How to create the best headlines ever”), and obviously an old-time favorite, hyperboles (“The absolute best headlines you’ll ever see”).

All of these happen to be very easy to apply to our own articles and Ads because we can always highlight some curiosity or explain something about what we are writing about or the product we are advertising. And this is just another example of how Display Ads and headlines shouldn’t be so different after all, and of how, more often than not, the rules that one follows can definitely help the other one.

So, this report’s conclusions were made by a couple of marketing experts who stated some of the things that we’ve recently been discussing:

So, to conclude, I believe the world nowadays faces challenges that we used to not even know existed a couple of years ago. Today’s scenario pushes all of us to become better, more creative, more innovative, and to come up with new strategies that can help our Marketing Campaigns become more effective and our content more appealing to users. I don’t believe this is a bad nor a good thing on its own, but I do believe that if the world is so boldly asking us to update and find new ways, then the least we could do is give it a genuine, innovative, and hopefully successful (see what I did there with the three adjectives? Feel captivated?)  shot, right?