So Eve recently saw the following ad on Facebook, and I have so much to say about it that I’m turning it into a post: 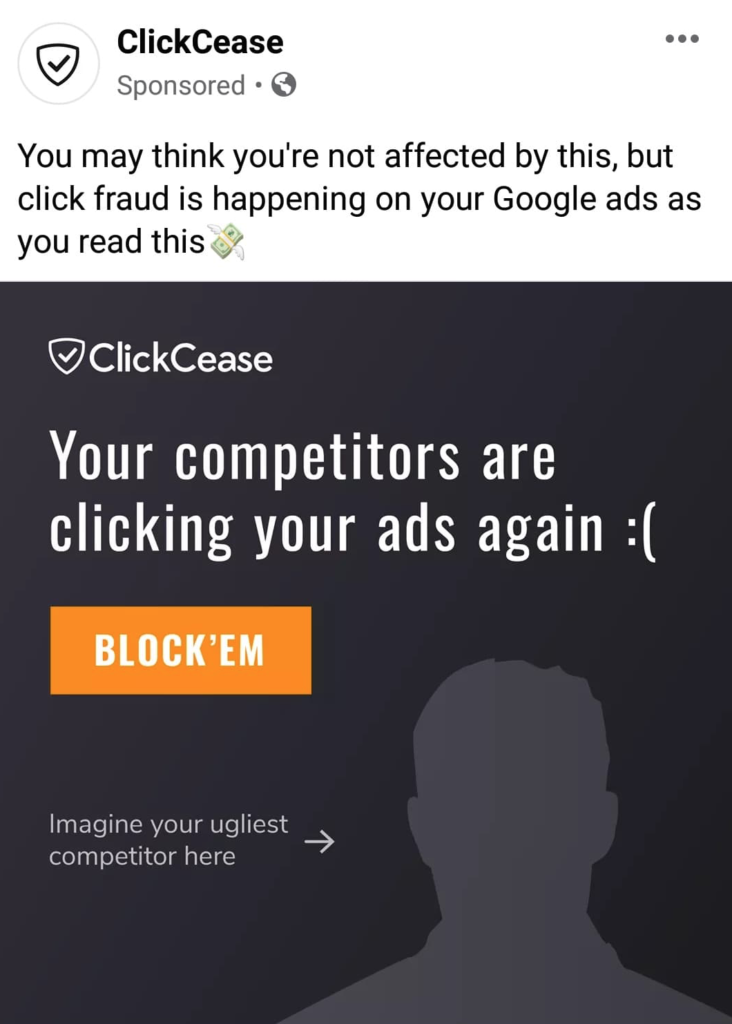 First, before we dive in, ClickCease just announced it was acquired by Cheq.ai. Timely ad, indeed.

Now, this ad is interesting and well done in a few ways that are worth mentioning.

First, good ads start with an emotional appeal, not a logical appeal. And this one gets right at it–in big, bold letters, the anger of your competitors wasting your ad budget: “Your competitors are clicking your ads again”. It leads to one of the strongest emotions, anger.

Second, that sentence ends not with a generic, can’t-go-wrong period but a “:(“. This has two results. First, it reinforces and clarifies the negative emotion from the wording. But it also lightens it up. Emojis and half-emojis like the “:(“ are simple and fun. It keeps the tone and the fear there, but doesn’t make you worry.

Third, what’s the next thing you see in the ad? “Block’em”. This is great because it implies a SOLUTION to the PROBLEM. And not just a solution, but a fun one. It feels good to block an a–hole, doesn’t it? Yes, they’re giving you this emotional high.

Fourth, note the very minor semi-typo in “Block’em”. It should be two words, with a space, “Block ’em” but they combined them into one. This is in-line with the informality of the “:(“ — keeping it young and fun. This is a subtle way of positioning the company as the newbie competitor, not the stodgy Old Master.

Fifth, the next part you notice is the outline of a man, with the phrase, “Imagine your ugliest competitor here”. Ha! Funny, I laughed.

Now, this is a clever line. It took me a minute to understand it, but once I did, I appreciated it even more. You’re imagining your competitor and then you click–on this ad–just like your competitor is clicking on your ad. Ha! Subtle but awesome. If that was obvious to you, then you, sir, are smarter than I am–well done!

But why is this concept good? Because the product is about getting at your competitor. And this does a few things:

[A] It encourages you to imagine your competitor, and just imagining that builds up the anger.

[B] It encourages you to think about your competitor as someone ugly. You, of course, are beautiful, so you’re feeling better and superior already.

[C] It encourages you to click on his face. Thus, it’s like you’re hitting him metaphorically, getting back at him emotionally for what he did to you, but wasting your ad budget.

[D] For those who understand the humor, it is an easter egg that these guys are smart and subtle–exactly the type of people you want to hire.

In conclusion, this ad works from many different angles.

What would I have done differently? A few things:

Would these have made it more effective? Maybe, maybe not–but worth trying.