Microsoft’s alternative to Adwords–Bing Ads, to use the name we always use but Microsoft is trying to get us away from, just as much as Google is trying to get us away from “Adwords” to use the always-ambiguous “Google Ads”–has been testing out their display network. You may have missed the news two years ago, and you probably didn’t notice it in the interface since you just auto-update Bing based on your AdWords ads, right? No, you would never do that, but give it as much as it deserves with 15% of the Adwords traffic!

But we’ve all tried Bing enough to know and understand its pattern: its the perennial laggard in terms of features. AdWords adds something and Bing adds it two years later.

Yes, they have some idiosyncratic differences–the annoyingly different treatment of negative keywords has pained me more than one time!–but overall, the pattern is clear: Bing as the Follower.

But hot news: Bing is–apparently!–working on innovating, one step ahead of Google Ads in at least one feature.

In particular, Search Engine Land reports that Bing, on their nascent display ad network, is integrating with royalty-free stock image sources–Shutterstock, in particular–to allow you to create visual ads, including choosing the images to use from their image stockpiles, within the interface. 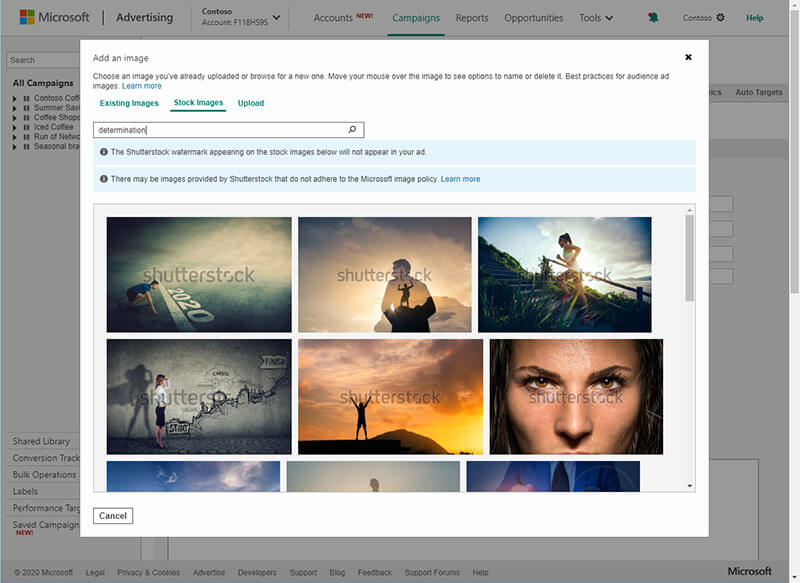 In other words, rather than hire a designer or use one of those self-service tools (or, Ba’al forbid, attempt to use Photoshop yourself!) you can now create visual ads including all the images and photographs necessary, directly from Bing.

Imagine the standard Google Adwords editor to create an ad–but for Display ads, and you just find the imagery to use directly as another option.

This sounds easy-easy, but there are still a few questions and two downsides. One question is: how well does it design ads? And another is: does it automatically create the ads in all the sizes and formats as tools such as Bannersnack do? If you’ve been exposed to this functionality, let us know!

One downside is that this will make it easier for low-quality campaign managers running low-quality campaigns to create more ads unlikely to work. The under-stated strength of hurdles is that it makes it more likely for quality to surface (while of course, the Type II error of preventing some quality managers from making it to the top is always around).

The other downside is that, as a Bing / Microsoft innovation, you can’t export it to use with Google Ads. And most managers keep the campaigns in sync. But perhaps, just perhaps, this feature may be enough to convince some PPC account managers to fork their campaigns. At least those with big enough Bing campaigns.