How would M.M. Bakhtin PPC?

How would M.M. Bakhtin PPC?

Okay, M.M. Bakhtin isn’t quite a “philosopher” but more a half-way point between a “philosopher” and a “literary critic” but what, really, is a philosopher anyway? Who would put, “Philosopher” onto his LinkedIn (without getting laughed at for the pretentiousness of it)?

Whichever he was, he was one of my favorite thinkers whose works I absorbed Way Back When and he has at least one idea worth sharing: heteroglossia vs monoglossia.

Here’s his core observation. Traditionally, stories were told via poetry and in particular the Epic Poem format. Is Homer completely forgotten or now thought to only be the Butt Of All Jokes father on The Simpsons? And, he observes, one core characteristic of epic poems is that the story is told from fundamentally one point of view, that of the narrator or the poet himself telling the story. It has lots of characters but one voice, one language. Hence monoglossia: mono=one, glossia=glossia (language). (To give away my jokes, that was continuing the Simpsons theme and an allusion to the all-time best Simpsons episode, of the Monorail, where the charlatan selling the town the monorail, while teaching the class in school, writes on the board and points out that Mono=One and Rail=Rail.) 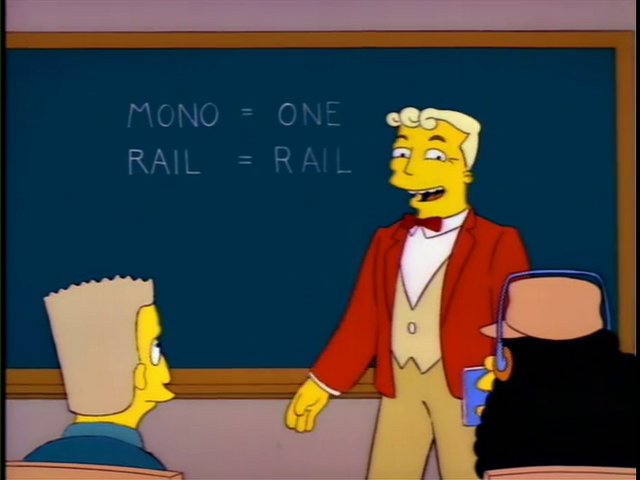 (Yes, I know that revealing my jokes makes them a lot less funny. But some references are too esoteric and I egoistically think they’re too good to not explain.)

Over the centuries, Bakhtin argued, the predominant form of telling stories evolved until the modern (modern=mid-2oth-century) form, which was the novel. The novel–and even more so the predominant forms that have followed it since he wrote: television/movies/video and now the Internet–transformed the style of the story from One Voice to Many Voices: each character in the novel (or, say, the Netflix series) has a different voice, style, way of thinking, perspective and personality, and so forth. From Monoglossia to Heteroglossia. Hetero=different, glossia=glossia.

Your humble author may or may not have written a senior honors thesis for an English major on how the then-novel (novel in the sense of “new”!) (yes, that as a lame pun) form of storytelling called “the Internet” was a continuation of Bakhtin’s observation of the inexorable trend of increased voices from the increasingly hetero- story-telling format. And funny that Bakhtin used the prefix “hetero” in the same sense that in our more modern language we would say “diverse” although, in other contexts, “diverse” and “hetero” are often juxtaposed. Ha!)

So with all that background… how would M.M. Bakhtin PPC?

In short, he’d be a good PPC, because his hetero- (in the “diverse points of view of telling a story”) frame is deeply powerful from the PPC and the digital marketing point of view. In one important way, at least:

When you target your campaign, you want to target it towards many different types of people. “Personas,” marketers sometimes call them, or in a more pedestrian way, just different “targets.” So you need different campaigns and different adgroups aiming at very different people. And these different targets (and your various campaigns targeting each target) need very different voices and styles.

But not just that! You need to approach a lot of different people you work within very different ways, and frame what is happening in the way that will make the most sense to them.

Of course, this implies a corollary: Homer would have likely been a not-ideal PPC, for the converse of the reasons stated here–he has one particular and strong voice and view. (As eloquent and as powerful as it is.) Homer, continue letting the goddesses sing of Achilles’ rage forevermore, but I’d rather put M.M. Bakhtin onto my Google Ads account than you. Sorry, you just can’t be everything to everyone.