Display Ad Analysis: The Makings Of A Good Display Ad

Display Ad Analysis: The Makings Of A Good Display Ad

Since we spend hours upon hours together on the internet every single day, it makes sense that we come across dozens of display ads. In most cases, we tend to ignore what a display ad is trying to tell us simply by scrolling past it. This doesn’t mean that the ad in question isn’t particularly interesting or attention-grabbing; it’s just that we collectively suffer from something known as banner blindness which inhibits our ability to view ads online.

However, let’s not get into that here. Rather, let’s discuss the times when a display ad grabs our attention and holds it for a few seconds before we continue on our scrolling spree. Lately, I’ve found some of the best display ads to be on Instagram. You could argue that it’s because I spend so much time on it (thanks, cute puppy reels!), but it’s also because a display ad on Instagram is basically in the form of an Instagram post. This is why whenever you’re using the Instagram mobile application and scrolling through your feed, the ads that you see take up pretty much your entire screen in the same way that unsponsored posts do.

As you can imagine, this is a very effective method of capturing a user’s attention because they initially think they’re viewing a regular Instagram post and only realize that they’re viewing an ad after they’ve viewed it for a second or two…..no room for banner blindness here! More often than not, only eagle-eyed viewers notice the ‘Sponsored’ tag on a post and most people (like me!) tend to scroll quickly and devour every piece of content they come across. 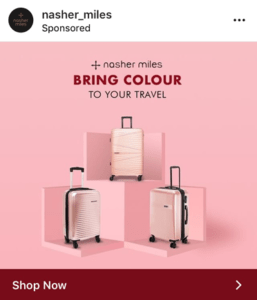 Take a good look at this ad and think about the first thing that you notice here. I’ll tell you the first thing that I noticed: the color palette. Now, I’m all for ads that have great pops of color peppered through them to highlight different products and features of each product. However, every now and again you come across an ad such as this one that has a rather muted color palette with an overall pleasing effect on the eye. If I had to venture a guess, I’d say this is what caught my attention and put the brakes on my frenzied scrolling.

The rose metallic, champagne, and other shades of pink that are featured in the ad work well together to create quite an interesting visual effect overall. Now, let’s talk about the written content in the ad. What I found to be impressive about the written content here is that it features just one line, ‘Bring Colour To Your Travel’. Fair enough, most people purchase suitcases in black, grey, brown, and other neutral colors. However, if you’d want to mix things up while traveling, it would make sense to purchase a suitcase in a more eye-catching color.

This brings me to what I found a little odd about this ad. If you’re going to talk about bringing color to a user’s travel experience and you’ve featured three suitcases in the ad, why not feature three suitcases of different colors? I know, I know, I spoke at length earlier about why the color palette used in the ad is impressive, but that doesn’t mean that it’s a perfect ad overall. There are three suitcases here in three shades of pink, so even though the visual effect of the ad is pleasant, it’s not hard to imagine that those users who don’t like pink aren’t likely to click on the ‘Shop Now’ button above (but who knows what users care about regarding CTAs?) .

After all, if you’ve got a few words and lots of space in your display ad, then why not make the most of it and feature a variety of products? For instance, in the ad above, the maker could not only have featured suitcases of different colors but also featured suitcases of different sizes. In this way, those users who were looking to purchase luggage online would’ve obtained a fair idea of what this brand had to offer them.

Speaking of users looking to purchase luggage online, I wasn’t one of them….so why was I seeing this ad? It could be because I traveled recently but that doesn’t justify my having to view ads for luggage when I didn’t look for anything like it online. As far as ad targeting goes, I wasn’t particularly impressed this time around (what’s up with that, Google?). However, in most instances, it’s spot on and since I was making hotel reservations, etc. a couple of weeks ago I can see why I had to view this ad. I’m just not convinced about the timing of this ad appearing on my feed, but that’s a topic for another day.

Aside from the small criticism above regarding the lack of variety of products featured in the ad, I can’t see much else to complain about. After all, the written content is concise and gets the point across and the ad isn’t needlessly cluttered with graphic content. It’s the kind of ad that could make you stop in your tracks for a second or two, even if you aren’t particularly interested in the product in question, as was the case with me. So all in all, the ad that I’ve reviewed for you above had pretty much all the makings of a good display ad.