You can find a lot of variation in family structure nowadays due to the explosion of new family structures. Some of the examples of non-traditional families, which are also known as ‘Modern Families’ (and no, we are not only talking about the show) include divorced couples, same-sex couples, cohabitating couples, single parents, grandparents raising grandchildren, families with non-marital children, and a lot more.

Since no one knows what it is like to be a parent until he/she becomes one, everyone wants to get advice and suggestions from someone to ensure that they fulfill their responsibilities as parents effectively. When it comes to traditional parents, they usually get advice from their elders or relatives. Only 37% of traditional parents may go out of their way and seek help for parenting from apps, websites, or online counseling.

On the other hand, non-traditional parents and families are more likely to search for advice online. They face more challenges because of the society and people around them. They don’t know who they can go to for help. Moreover, they are more curious and conscious to know about the right ways of parenting. They have the constant fear of being judged by society, so they prefer doing online research instead of asking anyone.

Due to the lack of digital content, non-traditional families usually end up facing dissatisfaction. However, the reasons for their dissatisfaction can be different. It can be due to the lack of expertise of the author who writes content, lack of information provided online, and lack of credibility of the source. Usually, the dissatisfaction of non-traditional parents leads to disappointment and in some cases, they end up delaying the decision of becoming parents. Another problem with digital content is that it is mostly designed to cater to the needs of traditional parents. It is difficult to accept anything different from what it has always been. As a result, the non-traditional families don’t find any content they can relate to.

There have been a few ads that faced a lot of controversies because of showing non-traditional families. One of those ads is ‘Phillips Ad’ that featured a gay couple in the ad who tries to spice up the boring quarantine life. Here is the image from the ad:

The other example of such an ad is ‘Ritz Ad’ which says ‘Where there is love, there is family”. It gives the message that there are not only traditional families out there, what matters the most is whom you feel close to.

Here is the image from the ad: 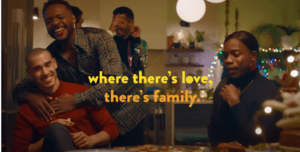 How to Cater to the Digital Needs of Non-Traditional Families?

If we start focusing on the digital needs of non-traditional families, they are more likely to be loyal customers of the brands than traditional ones. When they see the display of an ad or content consisting of families like theirs, they start feeling a connection with that particular service or brand.

Due to the emergence of ‘Modern Families’ in recent times, most of the non-traditional or ‘Modern Parents’ are young adults. According to a study, the purchasing behavior of young adults is more likely to get affected by the ad display. It matters for them whether they see someone from their age group in a particular ad or not. So, we can use this strategy to make sure that it caters to the specific needs of the young adults in non-traditional families (do you think there’s a FLoC completely integrated by non-traditional parents?).

Marketers should also put in efforts in increasing their DEI (Diversity, Equity, and Inclusion). It is quite evident that online campaigns that feature diversity have a higher call rate. The marketer should invite people from diverse groups to watch or read their content. Equity is another key factor that can act as a brand differentiator. It reflects on the importance of using diverse channels to promote a product, or content to make sure that it reaches everyone regardless of their age group or background.

For instance, if a non-traditional family consists of grandparents that are taking care of their grandchildren, they might not have access to Instagram or TikTok. But they should have an equal opportunity of learning everything that can help them. The other essential factor is ‘Inclusion’ which ensures that everyone has an equal chance to consume your offer.

For instance, the content you create should be for those as well who are visually impaired or those who cannot hear. Similarly, if you use the text ‘Romantic Couple Date”, it shouldn’t be limited to traditional couples. The gay couple should also be able to relate to it. If you use these three key differentiators in your marketing strategy, more people would end up watching your content or buying the product. So, it is a win-win for both the marketer and the non-traditional families.

Tabinda has been writing since forever, and it seems that her educational background in Economics, politics, management sciences, and psychology has given her an incredibly deep and comprehensive approach when it comes to display ads and PPC.